You've probably seen them. Yellow and white cards with GoodRx on them. The little card saved me money not only when I had no insurance but also when I had UnitedHealthcare's employee insurance plan. Saved me about $80 on what was going to cost me $200 otherwise. I hadn't met deductible yet so they were passing through inflated costs to me. Jerks.

It pays to look up every medication you take with their system at http://GoodRx.com or with their apps for tablets and smartphones. 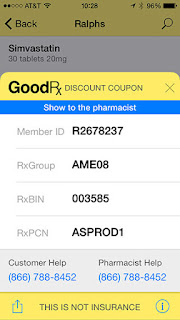 Notice that certain medications will be cheaper at certain pharmacies while that same pharmacy might have the highest price on another medication. Just depends on the deals cut between GoodRx and certain pharmaceutical companies as well as the deals each pharmacy and their distributors cut. Craziness.

Less helpful was BLINK. You pay in advance and unless you have them mail the drugs, you pay way too much in most cases I checked.

Another rip-off is some card called SingleCare. Often, their discount price was DOUBLE what you'd pay with GoodRx card.

Always find out what it costs if you just pay CA$H for a medication rather than using any insurance or discount card or savings club (membership) price.  More on those in a future posting. 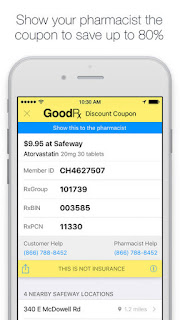